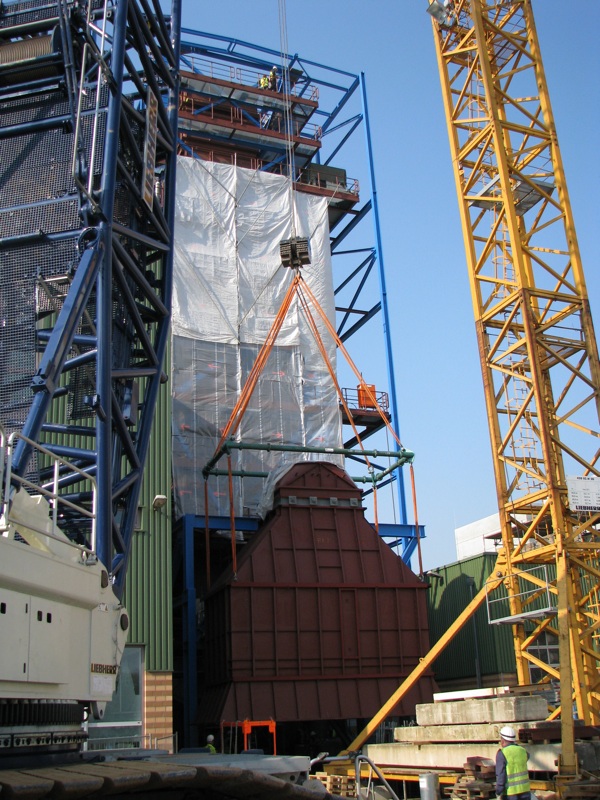 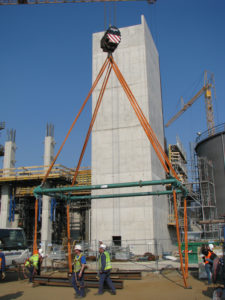 “During assembly of the waste heat steam generator, our collaboration with LGH meant that the overall task was significantly easier and far safer. Thanks to the modular 4-point spreading system there was no need to couple lower lifting beams – we simply secured the module directly at the four anchor points, which were essential for good stability.”

“The 4-point spreading system considerably enhanced the speed and safety of the operation. And because we were able to directly secure the components to the four anchor points, we also considerably cut costs.”

The erection of the waste heat steam generator required the utmost precision as the demands in terms of handling and safety increased significantly with increasing assembly height. The final three components of the waste heat boiler needed to be added to the prefabricated boiler pressure section one after another upwards of 28 m. Due to their shape, the rectangular components needed to be lifted via 4 sling points in order to ensure absolute stability when lowering them onto the boiler pressure section. At the same time, the engineers needed to be careful not to unnecessarily increase the construction height still further as the assembly height already stood at 28 – 32 metres.

Using a modular 4-point spreading system, a 600-tonne Liebherr LR crawler crane from Breuer & Wasel was implemented to lift the square components, which were pre-mounted on-site. Two boiler components of identical size – each 8 x 4 m wide, up to 1.80 m high and weighing 30 tonnes – were lifted consecutively and placed on the boiler pressure section. It is in tasks like these that the 4-point modular beam system comes into its own, as the four sling points ensureextremely high load stability. At a height of 32 metres, the lifting and mounting of the top, and final, component of the waste heat steam generator – the muffler hood –  required an extremely flexible piece of equipment. Due to its special rectangular shape and the pyramid-like protrusion, it was only possible to lift the 13-m high component by securing it at four points.