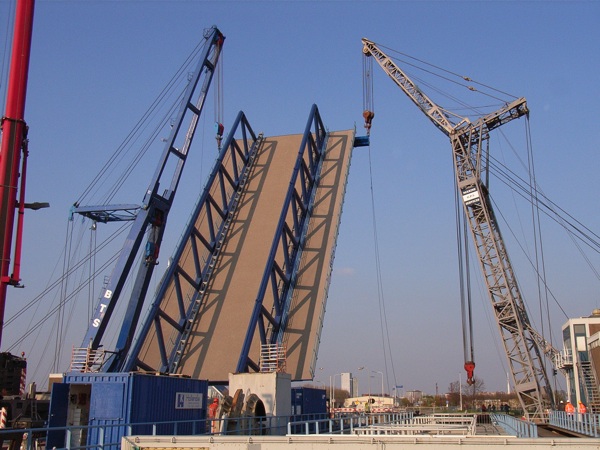 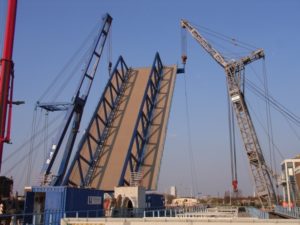 “The speed of execution was key with this project so it was essential that we could rely on the quality and availability of the lifting gear. In this respect LGH was the optimum partner.”

With a passage width for ships of 40 metres, the South bridge and the North bridge spanning the West lock near Terneuzen are the fourth largest bascule bridges in the Netherlands. Because the North bridge needed to be rebuilt as a result of a ship collision, the decision was made to rebuild the South bridge at the same time. The replacement of the two bridges needed to be carried out swiftly in order to prevent extensive delays of shipping traffic. Furthermore, in order to prevent future ship collisions, it was also deemed necessary to re-design the bridges.

Based on a plan from Hollandia, the fulcrum of each bridge was moved further back, which also made the bridges straighter, thus increasing the space available to the shipping traffic and minimising the risk of collision. To assemble the bridges, Hollandia used triple and single sheave blocks with a load capacity of 30 tonnes, steel wire rope and shackles, all supplied by LGH. The deciding factor here was not only the fast availability and delivery of the required equipment, but also its quality, as it was crucial to ensure that the project was completed as quickly as possible.