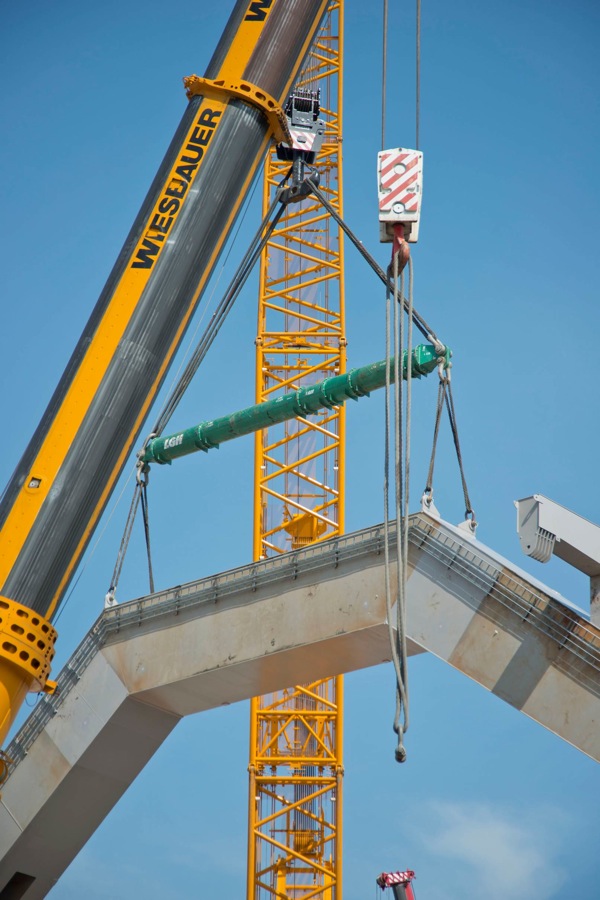 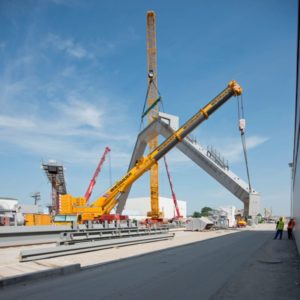 “LGH has the right lifting equipment on hand for every situation. This makes it a reliable and flexible partner for lifting projects. I don’t know of anybody in these parts who has a modular spreading system of this size at their disposal. Without LGH’s 400 tonnes modular spreading system it would not have been possible to complete this lift safely.”

For building activity to continue at the new block 9 at Kohlekraftwerk Mannheim, a so-called coal or portal scraper had to be erected and firmly mounted. The portal scraper is responsible for the digging out and transporting from coal tender to the coal pulveriser. Given the construction of individual parts, it was not possible to pre-assemble the portal scraper. Instead it had to be assembled in a lateral position and erected as a whole unit. To ensure that the ready-assembled portal scraper could be permanently welded at its ends into the ground, the heavy part weighing 215 tonnes had to be lifted evenly from the horizontal to the vertical position and precisely aligned. The uneven weight distribution – there was a difference of 40 tonnes between the two sides – presented the project manager of the company Scholpp AG with the problem of how to lift both ends equally.

Only LGH’s 400t modular spreading system could ensure that the 215 tonnes heavy portal scraper would be securely lifted from the horizontal to the vertical position. Last-minute changes to the spreading system and to the steel cables, due to crane static variations, could be made without delaying the project. The company Scholpp used the LR 1750 Liebherr crawler crane for the lift. This main crane, together with two other wrecking cranes, had to hold the entire load. The two ancillary cranes, the Tadano Faun ATF 400 and Demag AC 500, had the job of countering the uneven weight distribution and bringing the portal scraper into the correct position for the welding procedure. For three days and nights the three cranes had to hold the portal scraper until it was permanently welded into the ground. After 56 working hours, the lifting project was successfully completed.