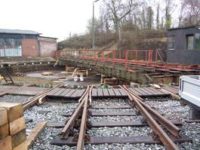 “We decided for LGH and its synchronous lifting systems very early on. Our decision was based on their extensive advice and expertise, so we knew that the project was always in safe hands. For us it wasn’t just about a cost-effective solution, but also crucial know-how, without which even the best machinery is of little use.”

In view of its importance for the town’s history, the railway depot in Krefeld is listed on the city’s register of historically significant monuments. It is the last preserved railway depot in Rhineland constructed in the style of such depots in the period between the start of the 20th century and World War I. The Krefeld heritage-protected railway turntable is stored on a round rail. As such the roundhouse with 16 stalls has full control of where the maintenance work on each locomotive should be carried out. Essential restoration work made it necessary for the railway turntable to be lifted about one meter above ground. In order to avoid a blocking in the main bearing it was crucial to ensure that the turntable was raised completely symmetrically. What made this difficult was the fact that the turntable lay in a depression and the lifting points were thus not balanced. Given the turntable’s advanced age, replacement parts are no longer being made and possible damages would be even more serious. The success of the project clearly depended on a precise workflow and suitable lifting devices.

After inspecting the site in Krefeld, LGH experts together with mgw Service staff, drafted a plan that heeded these special conditions. The team also had to take into consideration the fact that a pilot box was located on one half of the turntable, and its weight had to be included in the lifting force calculation. In addition to 8 hydraulic jacks, LGH’s manually controlled synchronous lifting system was also used for this project, which guaranteed that the turntable would be perfectly even when lifted and lowered. First sand was dumped onto some spots of the subsurface in order to make sure the ground was completely flat. Then the 8 hydraulic jacks were placed in position – four jacks on each side – and attached to the 8-point manually controlled synchronous lifting system. The hub could be steered centrally with the help of the synchronous lifting system, thus ensuring that the railway turntable could be slowly but surely and evenly lifted one meter above ground. LGH’s qualified staff paid particular attention to ensure that the pins did not get caught in the pilot. In total it took roughly eight hours for the lifting to be completed. Then the necessary restoration work – the railway turntable survived World War II and was refurbished for the last time in 1956 – was completed. The difficult part of the project began once the repair work was finished: The turntable had to be perfectly even while being lowered and threaded into the bearing. Complicating matters, the tolerance of the bearing was extremely low. After several attempts, the pins could finally be threaded into the bearing.